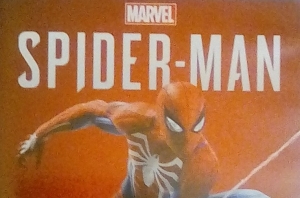 Since I’m still trying to complete Spider-Man on PS4 (that thing called work is rudely getting in the way), I thought I’d look at some of the other Marvel superhero games I’ve played over the years. To be fair, there have been quite a few that I’ve played, So I’ve managed to round it down to my favourite five.

The Amazing Spider-Man on C64

This was one of the first superhero games I played. The main plot was to rescue Mary-Jane from the clutches of Mysterio. It was up to Spider-Man to infiltrate Rockwell movie studios and stop Mysterio’s plans. This game is where I got a taste for puzzle games. Since it was a platform/puzzle solving game. It also had the typical enemies to beat up, but it really made me think.

Now, I know what you’re going to say. Why is this in the top five? Yes, the game had more bugs than a hot summers night and the controls weren’t exactly precise. Not to mention, it didn’t have the best graphics. But I really enjoyed being able to switch between Mr. Fantastic, Invisible Woman, Human Torch and the Thing. And using their special powers to defeat enemies and remove obstacles. I’ll be honest, it’s not a game I’d recommend. But, if you’re fanatical about Marvel, it’s really worth a try.

This wasn’t too bad, the web-slinging between the buildings was pretty good. While outdoors, I stayed mainly on roof tops. I couldn’t get to the street level on this game. But it wasn’t really a problem. When playing indoor levels, the combat system was good. There were a number combo’s that could be used and a few web attacks that were fun to use. There were more boss fights than I really wanted. But, overall, it was fab game to play.

Bearing in mind this game wasn’t for children. Mainly because of the crude words, sexual innuendos and the gore. But if you’re a fan of Deadpool, like me, you’ll love this game. The story, well, there really is no story. Which is just so Deadpool. The game play was fun. Especially with the choice of weapons, with a flair for the hack and slash. The teleport function was a good part of the game, and is implemented very well during the fights. Deadpool spends most of his time going on a tangent. So I was often thinking, what is Deadpool doing now. Which was actually more fun than annoying.

This game is probably one of my favourites. Mainly because its Lego. I mean, come on, who doesn’t like Lego. But also because of the amount of superheros and villains you can portray. The game play is very simple, but effective. To complete all the levels, certain characters have to be unlocked. So there is a lot of replaying levels in this game. This game is great if you’ve had a hard day and you just want to chill. It’s lots of fun to play and hours will go by before you realise how long you’ve been playing it for.