This is the question I’ve been asking myself the past week. Why didn’t I get this game when it came out? Everybody’s golf was developed by Clap Hanz and SIE Japan Studio, it came out in August 2017. When I first saw it, I remember thinking ‘that looks a good game, I must buy it’. Did I buy it? No. Why, u ask? I’m still working on that answer. It wasn’t until I had a glance in the PS store and saw it in offer, I decided to buy it.

What I don’t understand is, I really enjoy playing golf. Whether it’s on a crazy golf course or as a video game. So, there is no good reason it took me so long to get it. And now I can’t stop playing it. It’s so easy to play and addictive, as I’ve found out. In order to hit the golf ball, all it takes is a three-click swing action. Just click X three times to get the desired distance and power. Of course, as time goes on, there are other things that have to be considered when teeing off. Such as, the wind direction and strength. What the weather’s doing and what type of terrain the ball has landed on. It’s also easy to get used to the camera controls and how to use the targeting map to your advantage.

I’ll be honest, my favourite part is creating the avatar. I always go for a goth look. Obviously I try to make it similar to myself. But, lets face it, we all make the changes we wish we had to the avatar. I had the basics to start with and was able to make a suitable black clothed avatar. Even though I’ve gone up in the levels and gained a lot more items for my avatar, I haven’t changed her much. I’ve always preferred the simple look. The game also gives more than just the general male or female choice. I could make a child avatar or an elderly avatar. Which is great. But, when you see the child characters play during the tournaments, the golf club looks too big for them. Which is pretty funny (sorry, daft sense of humour).

It’s relatively easy to rise up the levels. The ranks on the other hand, that’s a different matter. The quickest way to gain exp, is to win the tournaments. Every time I gain enough exp, I face off against a rank boss. There have been three in total. The last one being the big boss and the only way to rank up is to defeat that boss. I won’t lie, if you haven’t figured out how to get high scores during the tournaments, there’s a good chance you’ll struggle with the big boss. They really put me through my paces. 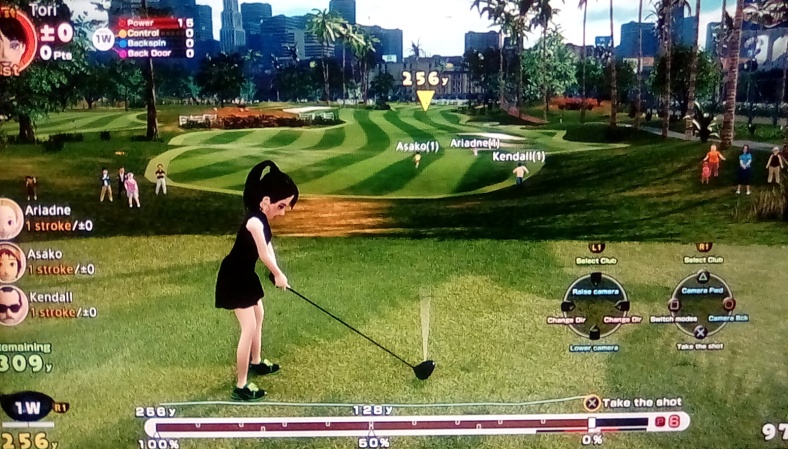 The ‘Home’ area of the game can be quite fun. It’s an open section, so it’s easy to run around and explore. Unless, you’ve defeated the right person and them you can drive around the ‘Home’ area in a caddy. There are a lot of other characters in this area. A few of them can be interacted with and I do recommend this. As some of them can give you some hints and tips to make your game better.

The game also offers online play. Whether you choose an open course or turf war. It’s a great way to interact with other players. It also means playing against people who can do more than put you through your paces. But, if your after a challenge, it’s definitely worth a try.

Yes, I’m kinda obsessed with this game. I’m still playing it now. In fact, as soon as I finish this blog, I’m going back on it. It’s a fun game to rest and wind down with, especially after a hard day at work. Everybody’s Golf probably has some negative points to the game and I probably don’t see them, because I don’t want to. It’s fun, it’s quirky, it’s definitely my kind of game.